Throughout childhood, my family home was far from static. My parents packed us up repeatedly, to move from Yorkshire to France, and then from France down to London (and since then, to two different homes in Kent) all before I’d turned 12.

I often wondered about this as a child. I would visit family friends and observe the sunlight, filtering through the same window, creating the same shapes on the same worn down carpets they had probably sworn to replace for years.

What, I puzzled, might it be like to live in one place for a very long time? Perhaps you grow restless, bored even. Or maybe, and this was the scariest thing, you would be fractionally more at peace in some way, deep down. More settled in a way that’s difficult to put your finger on.

It obviously didn’t worry me that much in the end though, because the moving only continued throughout my twenties as I periodically hopped from one corner of London to the other like a pinball, hot on the heels of various dreams and career opportunities. There were highs and lows, but altogether it was an amazing, inspiring experience and I’m glad that’s how I spent the majority of my twenties.

And so, with another big move on the horizon at the end of 2015, I thought I had moving nailed. I’d done it so many times before and it had never really bothered me, so surely this would be a breeze?

Absolutely wrong on all levels.

While an exciting time (probably one of the most exciting ever), this move has been so much more difficult than I expected.

Maybe because I’ve had a lot of other things on lately, my capacity to absorb and be cool about stuff like this has simply reached peak. Or, perhaps it’s because this time round I had a load of large(ish) furniture with me, which I had started to collect over the past year or so.

But for whatever reason, it was, and continues to be, completely nuts.

A dear and highly organised friend with a passion for pivot tables recommended we create a spreadsheet to chart, in varying levels of detail, what had been packed into which box.

‘You must do it’ she said, kindly but firmly over drinks a couple of weeks before moving day.

I admired her for this, momentarily considered whether this was for me, and promptly thought ‘Nah, I’m sure it’ll be ok’.

Well, last night, as I stood in a room of boxes simply marked ‘office’ and ‘loft’, beyond an impenetrably thick wall of surprisingly sharp objects and a maze of tangled wires – and with an urgent need to locate a document – all I wanted was THE BLOODY SPREADSHEET.

Why didn’t I do the bloody spreadsheet?!!

In retrospect it turns out ‘office’ or ‘kitchen’ doesn’t cut it, when each of those rooms has been haphazardly poured into nine equally sized and weighted boxes.

Do the spreadsheet, please.

Do it, or suffer the task of having to locate something urgent and irreplaceable in the aftermath of a game of box Tetris in the spare room.

If you’re not moving into a spotless property where the previous person contractually had to hire a cleaner, DON’T rely on the Disney-like thinking that the previous people felt the charitable desire to clean the oven just before they left.

If their departure was anything like yours, they had also left everything to the last minute, vastly underestimated the amount of crap they owned, and were frantically throwing their last belongings into Aldi bags while crying and hysterically laughing at the same time.

Don’t blindly stick a pizza on in good faith unless you fancy turning your kitchen into the entrance flap for Stars in Their Eyes and annoying all the neighbours with your smoke alarms.

Our neighbours did something nice.

Something so uncharacteristically nice compared to my previous experiences of many neighbours (think loud music and passive aggression) that I now wish I had been more prepared.

They gave us a cake. An actual home made cake. For literally no other reason than to be lovely people.

This took me by surprise, and with the kitchen still in ruins and the contents of a bazillion boxes covering every available surface, I felt a bit bad to be sheepishly returning their plate with a leftover box of baggy Christmas chocolates. (I WILL make this up to them.*)

And if your neighbours are grumpy gits? More cake for you!

4. Beware the experts! (Try and save some extra money…)

A string of lovely, tea-drinking experts like plumbers, plasters and electricians are visiting because we want them to do little aesthetic things, like smooth over a wall here and there, or add a new plug socket to a more convenient location.

The only issue is that experts know stuff, so make sure you’ve got some back-up funds for when they spot some crazy things you never even knew about when you were sizing up the property…

This happens to almost everyone I’m told. But still, *ouch*.

Don’t underestimate the power of the tape measure (and definitely don’t pack it a box marked ‘stuff’), however sure you think you are when you’re standing there with your hands on your hips and saying ‘Yes that’ll fit just fine, I’m sure it will’.

Whatever it is, be it a table, wardrobe or chair, it’s probably either a) drastically bigger, or b) shockingly smaller, than you think it is and boy will you know about it!

There are so many painful things to stand on/back on top of/walk into.

So far I’ve crunched the arch of my foot on an upturned plug and toe punted a paint tray among other eye watering encounters with my new, cluttered surroundings.

You’ll want your slippers. Trust me.

Despite all the madness, try to enjoy the process.

It’s easy to be desperate for it all to look perfect. To wish away the time and feel frustrated with the mess.

But this part of the journey is precious, however stressful, and one day you’ll look back on it fondly (or at the very least you’ll be able to laugh about it…) 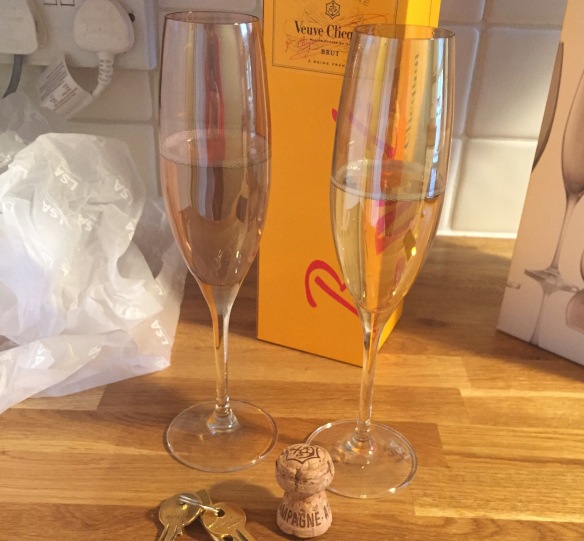 *When I’ve learned to bake.