Today my boyfriend and I decided to head to Brick Lane for an afternoon of general wandering. I wasn’t really in the ‘shopping mood’. I was happy just pootling around, taking in the sights and smells, and wondering how everyone was managing to be so effortlessly cool.

Then Andy and I decided to pop into a place called ‘This Shop Rocks’ on Brick Lane. It sells all sorts of vintage things from plates to hats and candlestick holders. As soon as we walked in I was instantly amazed at all the stuff inside, it was like a treasure trove and certainly lived up to its name.

As I walked round the shop, I pictured serving friends cocktails in vintage milk bottles with weird straws and cooking delicious foodstuffs with some seriously funky pans. You probably know the scenario all too well yourself. You instantly start imagining the things in your home/in your hair/over your shoulders and how bloody amazing they would be.

Anyway, I’d just about managed to control myself (reluctantly slinking away from the milk bottles), until we walked round and saw something A*M*A*Z*I*N*G. And that was it. I FELL IN LOVE. I fell head-over-heels in love in the way that so many people do with inanimate objects on aimless Sunday afternoons. It’s unexpected. It’s magical. Your bank account does not like it but who cares BECAUSE IT’S LOVE.

Straight away I started cooing and sighing, tilting my head to one side and shifting around on my feet excitedly. As I tugged at Andy’s arm crying “ohmygoditsbeautifullookatititsmyfavouritecolourandeverythingohmygodohmygodohmygod”, he stood there, stroking his beard and staring at it. He had his intense thinking face on, complete with furrowed brow, so I knew it was serious. Then after a few moments he turned around and simply said “You have to get it. It’s beautiful. Go on!”

Now, this gorgeous find is related to writing, so you can probably imagine why I lost my mind over it… Can you guess what it is yet? Here’s a hint…

Got it yet? Good.

Not got it yet? It’s a vintage typewriter.

It’s called a ‘Super G’ and it’s made by Smith Corona in collaboration with Ghia, and I believe it’s modelled on a racing car (complete with racing stripes). It was made in the 1970’s. This means the typewriter is older than me, which I think is really cool. 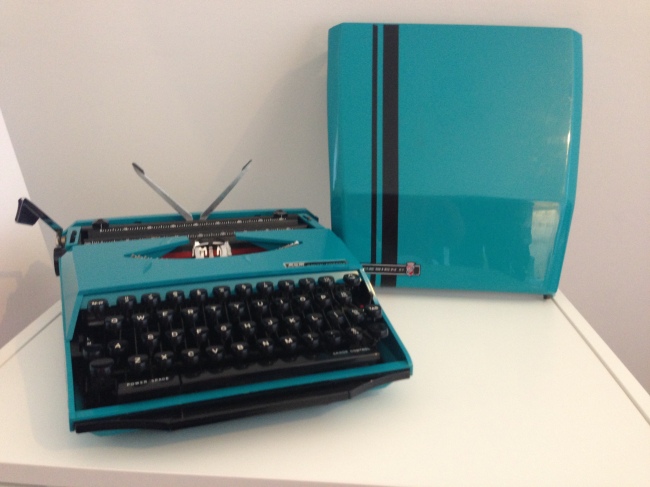 Like the geeky things we are, Andy and I rushed home to clean it, polish it and generally tinker with it until it shone like the sun. I did some research and it was also manufactured back in the seventies in orange and brown. It’s beautiful. 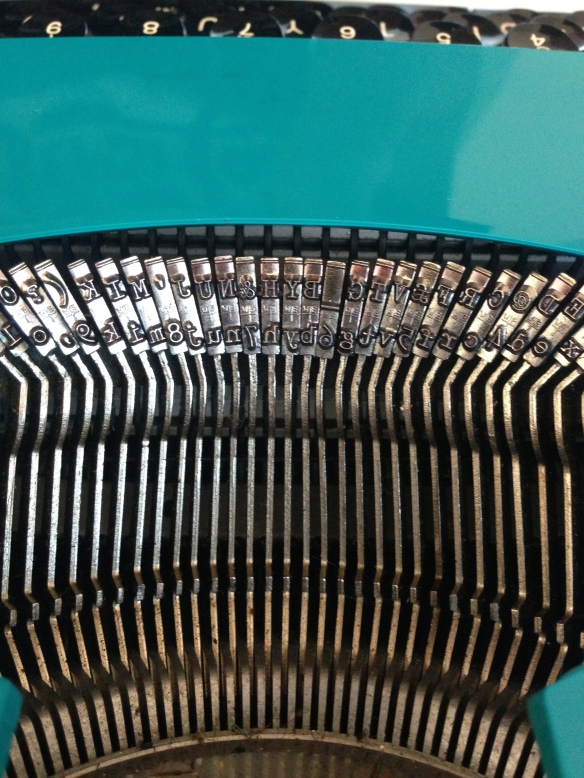 One of the loveliest things about this unexpected purchase is wondering what has been written by its previous owner/s… How many letters, words, sentences (or even whole stories) it has aided and how magical that all is. It looks like it has been well loved and well used, and it has known language before I was even born. Now, I love my laptop and wouldn’t be thrilled with the idea of producing a whole manuscript on a typewriter nowadays, but there’s something so cool about the clunky feel to its keys, the clever but so simple mechanical functions it has, the sound of the paper being rolled into place and the TING when you get the end of the page. It’s like being a kid again. 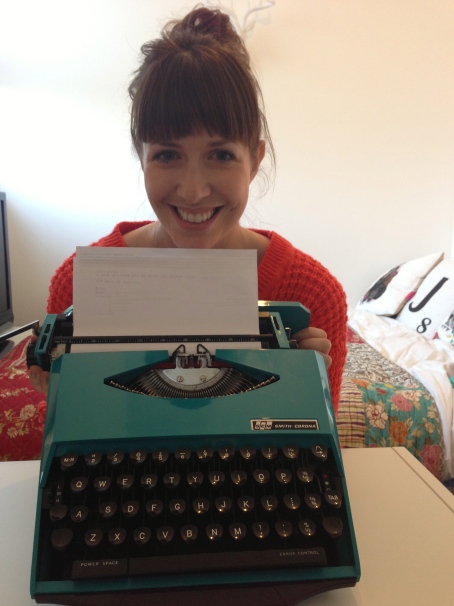 Me and Super G

Anyway, just thought I would share this with some fellow book lovers, avid readers and writers who might just find it as fascinating as I do.

What a brilliant day!